I am a self-proclaimed stats and graphs nerd. Ever since I’d been introduced to monitoring at work, graphs, stats and dashboards have interested me. With so many devices in my home being connected to the net, I didn’t need much excuse to geek out and put together a dashboard for my home. I’ll jump in by describing the devices I’ve begun monitoring. 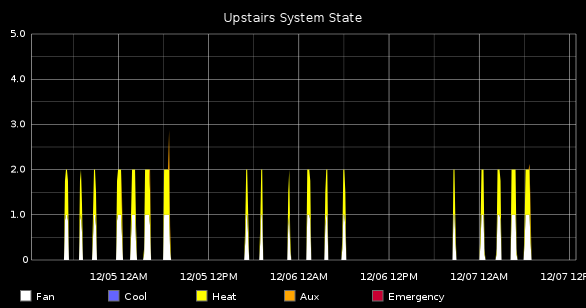 The obvious first choices were my two Nest Thermostats. These collect stats like current temperature and current humidity, along with the target temperatures and humidity. They also report what pieces of the system are active. In order to get at this data, I had a few options. The first option was Nest’s recently published developer API. This API uses oAuth, which allows services to easily request access to and control multiple accounts. The other option was using Nest undocumented mobile API. Auth is provided through user/password login, followed by an access token. I decided to go with the mobile API because I didn’t need all of the advanced features oAuth provides, just to collect stats on my own Nests.

My language of choice has been Python, and there are a few Python libraries for interacting with the mobile API. Initially, I used pynest but found that constantly making calls with it ended up invalidating my web sessions. This was because each call would re-login, and with a call happening every 5 minutes, my web sessions would get invalidated every day. Because of this, I decided to write a client that used a config file to not only store username and password, but also store the access token and expiry date. Burrow, as I call it, is a very simple client. It makes one call to get system stats, and returns the result as json.

The other devices I decided to monitor were my UPSes. I currently have two CyberPower and one APC units. CyberPower publishes a linux CLI client and it works fairly well. My APC UPS, on the other hand, is attached to my Windows desktop, and their Windows client is not very CLI friendly. Luckily, a third party publishes a daemon and cli client for monitoring APC UPSes: apcupsd. Right now, I only have one of the two CyperPower units monitored. The smaller unit is powering my R6300 router, and I’m waiting until I can get a small device like a Raspberry PI or Intel’s Galileo, it’s going to stay unmonitored.

Collecting these stats is fairly simple, I’ve registered multiple scripts in cron that run every minute. Output from the above tools is parsed and pushed to a service called statsd. I’ve published these scripts here: statsd-home. UPS stats are parsed via simple Regex, which can be a bit messy in my opinion. My Nest client provides json output, so parsing is a bit cleaner.

When it comes to stats aggregation and graphing, my choice was Graphite with statsd. Statsd provides simple wrappers and abstractions around the sending of raw data to graphite. All of my stats are simple gauges. Installing Graphite can be a little tricky as there are many parts to it, but I opted to use Docker and the Docker-Graphite-Statsd image. Docker provides a repository of pre-built images and orchestration for running those images within Linux Containers. Installation is as simple as docker pull hopsoft/graphite-statsd. Running is a bit more complex, especially if you are trying to run a container on boot, but the Docker-Graphite-Statsd README provides details on running the container.

Last comes actually generating the graphs and displaying them publicly. Graphite’s web interface is fairly full featured for building and testing new graph ideas, but I didn’t want to actually expose my graphite server. Originally, I had setup a cron job to periodically download the graphs to the web root, and some static html. But, not only was it becoming a pain to add more graphs, but it also didn’t allow dynamically setting the date range or colors.

So, I wrote a simple flask app that generates pages from a yaml config file. I’ve published that as well: pyrite. My config can be found here. Yaml is pretty powerful and by using a simple config file, I don’t need to set up something like a database. The config contains graphs, which are made up of targets (individual sets of data to graph), and properties for those graphs. Pages are also included in the config, they are made up of rows containing graphs. Ultimately, when images are requested, pyrite itself queries graphite and streams the image back to the user. 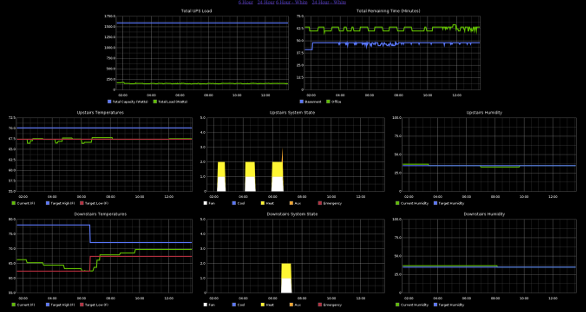 So, the moment you’ve been waiting for. My Home Dashboard can be found here: home.apmelton.com. The layout is dynamic, but it looks best at, or above, 1080p. The first two graphs are a combination of stats from my two UPSes. The next graph is current temperatures from my upstairs thermostat, blue line represents the temp cooling will kick in, red line represents temp heating will kick in, and green line is current temp. Following that graph is the upstairs system state. 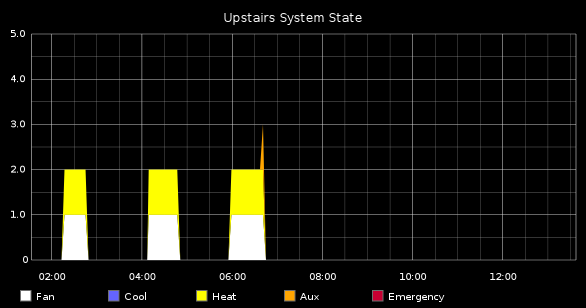 Each colored increment represents a different function that’s running. In the above example, you can see at 6:00am the fan and heat turned on, and at the very end aux heat clicked on as Nest didn’t think it was heating up fast enough.

The next graph contains current and target humidity. For my house, this is mostly just informational as I don’t have a (de)humidifier in my system. The next three graphs are identical to the previous three, but for the downstairs thermostat. Lastly, the bottom 4 graphs are individual UPS details broken down further from the first two.

Lastly, I’d like to touch a little on what’s still left to add and improve:

As a long time geek, I’ve amassed quite a few devices connected to the web. As I’m writing this, my router shows 17 devices connected via DHCP (I use static DHCP assignments for a good portion of my devices). I figure the best introduction to my adventures in nerdom would be to walk through the abundance of technology in my home. Many of my devices are your standard technology items found in many peoples homes, cell phones, set top boxes, and gaming consoles. In order to keep this post short(er) I will stick to the items that I find particularly useful or simply interesting.

First, I shall start with one of the most economical purchases on the list, my Chromecasts. These little HDMI dongles will currently run you around 35$. They plug directly into your TV (or Amp), and if you are willing to give up the ability to have Chromecast turn your AV devices on, can even be powered by the USB port provided on most AV devices. These little devices are so awesome because they basically turn my TVs into extensions of my phone or laptop at the push of a button. Plex, Pandora, Netflix, even Chrome can stream it’s tabs to the TV. The final benefit I’d like to mention is that as Chromecast is just an HDMI dongle, it is extremely portable between TVs. No matter the brand, I’ll always have the same interface. 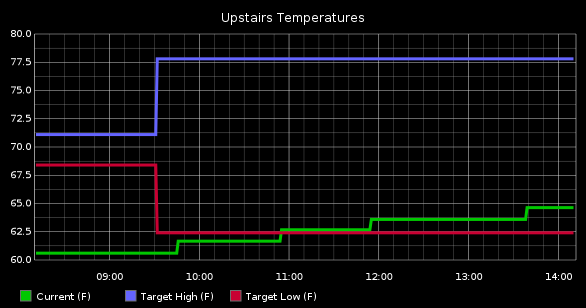 The next awesome devices in my home are my Nest Thermostats. These glassy black circles on my wall were designed by the guy who lead Apple’s development of the iPhone, so you know they look great. But, they are not all form, they allow me to control my thermostat from anywhere. And, their simple web based scheduling is actually useable, unlike my past experiences with programmable thermostats. My house has a dual zone system, so I’ve got two of these. One in the upstairs hallway and one in the living room downstairs. Compared to last year, they appear to have saved me around 10$ a month in power costs, we’ll have to wait until March to see if they can help at all in the Winter months. Nest provides some detail into system usage, but it is a fairly simplistic interface. Of course, I wanted more details and graphs, so I built some tools to track and graph what I can from Nest’s mobile API. That’s an adventure for another time though. 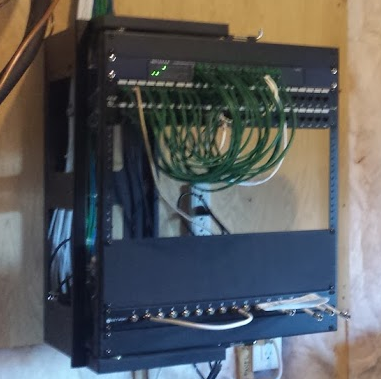 I’m fairly proud of my home network, though that may be a little bit of the Ikea effect. While the house was being build, my father and I wired it for gigabit ethernet, telephone and cable, along with tubing for central vac. Internet comes in from the cable company in the basement and connects to a Netgear WNDR3700v4 running DD-WRT. From there, it connects to a Netgear 24-port gigabit switch. Each room has 2 gigabit ports, with a couple exceptions for the larger rooms: master bedroom (4), living room (6), and kitchen (4). The attic also has an ethernet run just in case I’d like to set up some 1-wire devices around the house. Upstairs, I’m using a Netgear R6300v2, again running DD-WRT, as an access point. Having gigabit ethernet in every room might be overkill, but for streaming Full HD media and accessing file shares, it’s so much more consistent than Wi-Fi.

When it comes to stationary computers, I’m still running quite a few. My desktop/gaming rig is a custom built Windows 8 PC, running on a i7-3770k with an EVGA Nvidia 760. My main monitor is 27 inch 1440p, and secondary is 24 inch WUXGA. Audio is sent through a M-Audio M-Track Plus to two KRK Rokit 5’s. My file servers are both commodity gear, one is my old gaming rig, running Windows Server 2012 on a Core 2 Quad Q6600, and 4 different hard drives… The other is some surplus from work, it’s running Windows 7 Pro on a Core 2 Duo, it manages to run remote desktop and Deluge (bittorrent client) just fine. I’d like to eventually consolidate these two with an actual NAS unit running RAID 5 or 6 for fault tolerance, which I don’t have right now (I know… living on the edge).

My last server definitely deserves it’s own section. A little while back I started my endeavour to consolidate my servers and VMs running in random places on random hardware. I bought a refurbished Dell Poweredge C1100, with Dual Intel Xeon X5650 Hexa-core processors and 24 gigs of ram. It’s running VMware ESXi, and currently has 4 VMs on it running various services. This server hosts my Plex server, a Docker server running statsd, graphite, and various other stats collecting jobs, and some other servers running internal-only services. Once I’ve consolidated storage to a NAS, I will likely decommission my two Windows servers in favor of a single VM for Remote Desktop access. I’d have to say the greatest part of having an actual server is Dell’s BMC, which not only provides remote power off/reset but also remote console and virtual optical disk drives.

That about covers my LAN of Things. In future posts, I will likely go into more details of each of these and my personal projects.